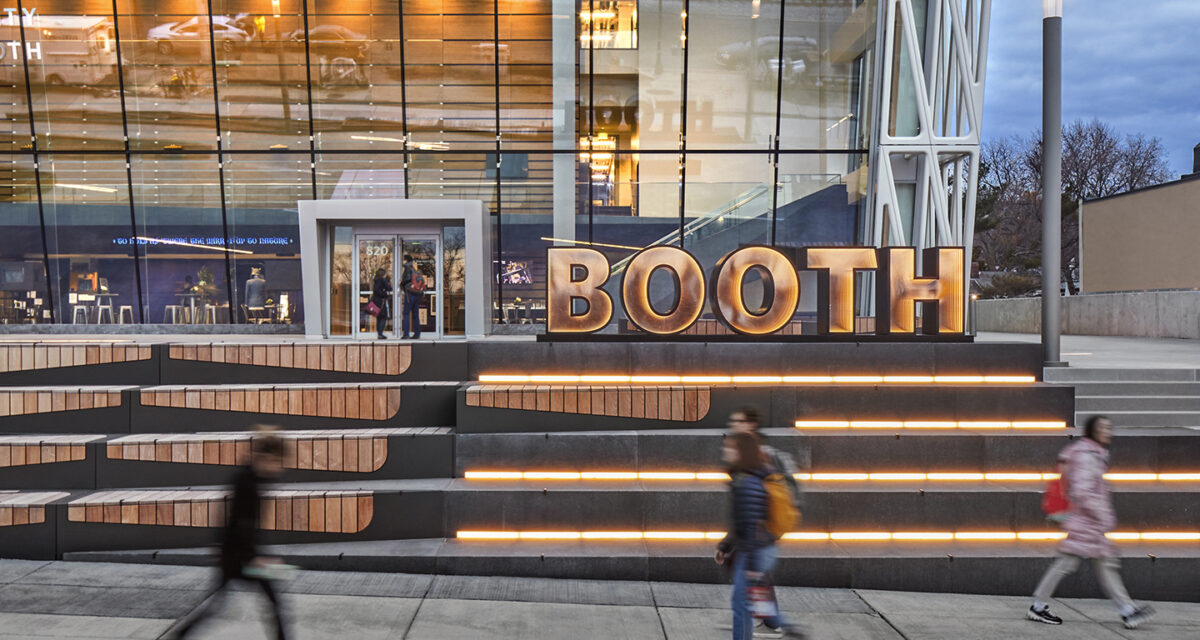 Check out this case study Landscape Forms prepared on the Booth Theatre Plaza:

Boston University’s vision for the Edgar Booth Theatre center fittingly took its inspiration from a line in William Shakespeare’s Hamlet: “To hold, as ‘twere, the mirror up to nature.” The theatre’s expansive glass façade canted toward the street was Elkus Manfredi Architects’ response to BU’s vision, acting as a mirror that reflects the community, landscape, and activity on Commonwealth Avenue.

Landscape architecture firm Mikyoung Kim Design (MYKD) designed the plaza and landscape/hardscape connecting the theatre to Commonwealth Avenue to be a welcome space for passersby and an exterior stage for performances or installations. The theatre is set back from the street, leaving room for a 9,500-square-foot plaza and a gathering space along Commonwealth Avenue. “The plaza, reflected in the façade of the building, was designed to be open and flexible, acting as a stage for everyday life or seasonal outdoor performance and events,” says MYKD associate Samantha Partington.

“The stepped configuration and soft materiality of the custom amphitheater units combine metal, wood, and plant material into a pedestrian-scale landscape zone that encourages seating and gathering between the busy sidewalk and open plaza,” says Partington. A combination of bench and planter units encourage both individual respite and group interaction.

The Booth Theatre building has brought design and production students back to the main BU campus along Commonwealth Avenue; previously students were located over two miles away. The new building, stepped landscape, and plaza celebrate performance and gathering, becoming what BU President Robert A. Brown described as “the centerpiece for the role that the students and faculty of the School of Theatre play in infusing the arts into our campus.”

Partington appreciates the expertise Studio 431 lent to the entire process. “Studio 431 worked through the construction details that maintained the original concept and design imagery,” says Partington. “Their experience and knowledge of materials allowed the design team to prefabricate benches and planters as units to achieve a cohesive design that would have otherwise been a difficult coordination effort involving multiple trades.” The Studio 431 team remained involved through installation, helping to coordinate lighting, drainage, and irrigation and offering onsite consultation when it came time to placing units in the complex stepped configuration.

“Working with Mikyoung Kim Design from their initial concept and basic renderings all the way to installation was fun and challenging,” says Studio 431’s Mark Haase. “Orienting the individual slats onsite was an intricate process,” explains Haase. “It was great to see a beautiful design become reality.”

Students and passersby seem to appreciate the new space as well. “Visiting the site since completion, it has been exciting for me to see the space active with students and pedestrians alike, stopping to sit and explore the stepped landscape and using the space as the approachable amphitheater we imagined,” says Partington.